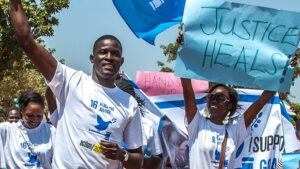 Can you introduce yourself ?

Hello, my name is Victor OCHEN. I am the founding Director of AYINET, the African Youth Initiative Network. I was born in Lira City in Northern Uganda and it’s currently the place I live and the headquarter of AYINET. I am a social worker and I hold a degree in Leadership and Development Studies. As some one born and raised in conflict zones in Northern Uganda, I consider myself lucky after witnessing the best and worst that can be done by human to a fellow human and such reality despite how stark it looks has been key in shaping my life choices – especially in favor of acting with compassion and kindness towards community social-uplift.

When did your journey start ?

My life has been indeed a learning journey, with several defining moments and turning points. With a childhood defined by war I grew up in a community surrounded by fears and real sufferings. Until I was 12 years and after decade of daily struggle to survive the impacts of conflict, I saw fellow children being abducted and recruited as child soldiers, being forced to commit horrific crimes and I reached a point where it was not a question of if, but rather when I would be abducted and perhaps killed. Out our despair and despite my age I formed a peace club in the Internally Displaced People’s camp primarily to promote peace. It was the most riskiest move to challenge child abductions and killings in an area controlled by abductors and killers, but I stood by my choice for peace.  Until 16 years ago, when I started AYINET with the intention to mobilize and engage youth and community in promoting peace. AYINET is an initiative started out of pain, on the peak of war and our work becomes a motivation to us, and eventually an inspiration to others. So, proudly I can say our initiative has enabled us to become a key player in transforming our society, and has become now a great inspiration to many young people who have or might still be going through suffering as a result of war. We carry with us the pride from Africa and commit to serve humanity and always represent Africa with dignity.

Why becoming part of Endelea ?

After years of working to support the poor and the most vulnerable people in Africa, we are ready to take the next step. For way too long I have been looking to build collaborations and partnerships with organisations who really meant well but I never found that one operational partner for AYINET.  Now, after a year of working together with the founder, I do know now that Endelea is this organisation. I do identify with Endelea’s values, priorities and I hope my coming on board in the Foundation will be an opportunity for the voices from the Global South. I will always be willing to input accordingly so that Endelea Foundation remains on course to pursue and achieve her vision for a better and more human world. Above all, through Endelea I look forward to learning and exploring more possibilities of digitalization and modernization with respect to African traditional norms.

What is your vision on the foundation’s objectives ?

It is my hope that I will meaningfully contribute to ensure that Endelea Foundations’ objectives align and are implemented in the most human ways, that Endelea will become a model foundation within the charity and humanitarian arenas, where interventions are people centered, programs are designed and owned by the beneficiaries and opportunities become available to those who need it most. I hope to play a role to ensure Endelea is deeply rooted in Africa.

In the list of foundation’s values, Trust pretty much aligns with my personal and AYINET’s values. I chose trust because it’s only with trust that we can seek to mobilize and engage the best in another human, and it’s only when we trust that we will act with kindness, build relationships that withstand trials and recognize and appreciate contributions by and to each other. In Africa, we celebrate “Ubuntu” (“I am, because you are”), which actually means that we are because of one another). And with trust we can take it to the level that “ without you, I can not” meaning without one another we can not and this is the only reason why we need to build the most accountable system, accountable world and eventually a better world.